David Cook takes the reader on a birchbark canoe journey through the landscape in the context of Northeastern geological development and Indian prehistoric culture. On rivers, lakes, over carries, and through coastal routes, we follow the archaeological and historical record, informed by accounts of early explorers.

First attempted in the early twentieth century, the publication of these ancient canoe routes, in daily use for millennia, is finally accomplished and in its third edition, with translations of Indian place names, a thorough index, notes and bibliography, and a foreword by Penobscot tribal historian, James Eric Francis, Sr. The eminent anthropologist David Sanger, PhD, provides an introduction.

In the summer of 2013 David Cook and Mike Krepner, cofounder of the Northern Forest Canoe Trail, traveled one of the ancient canoe routes, and stopped along the way to give talks.

Dave lives in Winthrop, Maine, near the capital, Augusta. A former president of the Maine Archeological Society, he is adjunct faculty member at Central Maine Community College and the University of Maine at Farmington.

The author grew up in the town of Milo, Maine. As a paratrooper in the U.S. Army’s 101st Airborne Division, he served a tour of duty in South Vietnam. A graduate of the University of Maine, Orono, with a Master’s degree in liberal studies, he chose to live in Maine and taught history at Winthrop High School, where he was chairman of the Social Studies Department. He continues to research and explore the history and ecology of Maine and the Northeast.

Order saying you saw this write up on Insights and deduct $5 from your total. 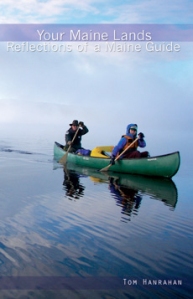 Your Maine Lands by Tom Hanrahan

On behalf of Maine’s Department of Conservation, a master Maine guide introduces the free amenities of the nearly one million acres of Maine’s public lands, including hunting and fishing, with advice on how to prepare for a visit to the North Maine Woods. Features thirty-eight illustrations by Kelly Thorndike.

With a foreword by Governor John E. Baldacci, and an introduction by Commissioner Patrick K. McGowan, Department of Conservation.

In 2007 Charles Norman Shay went to Washington, DC, to receive the Legion of Honor medal from French President Nicolas Sarkozy. The medal has joined the others bestowed on him, including a Silver Star and four bronze battle stars from World War II and the Korean War, in his home on the Penobscot Indian Island Reservation in Old Town, Maine.

As a young Army medic he had been in the famed 1st Infantry Division that landed in the first wave on Omaha Beach, Normandy. He does not recall how many men he pulled from the water while bullets were streaming past him. “We’ve all had our individual experiences, and none are more dramatic than the next,” said Shay, characteristically modest.

Shay was a medic who saved many lives that D-day in 1944 when 3,000 Allied troops died and some 9,000 were injured or went missing. Shay repeatedly plunged into the treacherous sea and carried critically-wounded men to safety.

His book honors all who served but it was hard for him to recall the past while writing it.

“My book is a journey into the past, a past that I would prefer to wipe out of my memory but this is not possible. At the very beginning on Omaha Beach, it was difficult for me to witness so much carnage and not be affected emotionally. It was necessary for me to close my mind to what I was experiencing in order for me to be effective at doing what I had been trained for. Once I had accomplished this, I was able to operate effectively and even saved a few lives,” said Shay.

Shay performed Penobscot ceremonies on Omaha Beach every time he returned to the battle site.

“The ceremonies are my way of trying to take up contact with the spirits of the brave men that remain there. I can never forget the men who paid the ultimate price that day, especially the young men who never experienced life as it was meant to be, a wife and a family, but instead were destined to depart this life in some far-off place they had probably never heard of while growing up. I perform this ceremony every time I return to Omaha Beach. It has to be a very solemn affair,” said Shay.

After Omaha Beach Shay continued on in every major battle until 25 March 1945 until he eventually became a POW of the German forces.

In the Korean War, he was a combat medic in charge of litter squads, later advancing to senior NCO of the medical battalion, 2nd Battalion, 7th Infantry Regiment, 3rd Infantry Division.

“We landed in North Korea at the recently-captured harbor of Wonsan. We fought a bitter battle to assist in extricating a Marine division that had become encircled in the Chosin Reservoir when the Chinese armies entered the conflict in the fall of 1950. It was bitter cold with temperatures dropping into the minus double-digit figures. Frostbite became a major problem. Our mission was successful, and we were evacuated by ship on Christmas Eve,” said Shay.

Humble, dignified, and gracious are other attributes that describe the war veteran, who is 89 — but seems much younger. His home is decorated with memories of a life largely spent in Austria and Penobscot artifacts.

Under his medals in a black frame in his study is a tattered telegram from the War Department to Florence Shay, telling her that her son was missing in action. Two months went by before a knock on her door in early May of 1945 brought tears to her eyes, but they were tears of joy. Her son was home.

Shay respects and honors his family ancestry and has visited towns associated with his French lineage, but he says that he is the proudest of his Native American heritage.

“I’m very proud to be a Native American, a member of the Penobscot Indian nation. I’m trying to do whatever I can to promote my Native American culture, to promote what my ancestors have done for the people of this small reservation,” he said.

When he returned to live on the reservation nearly 10 years ago, he worked in earnest to promote his tribe and pass on the history of his nation. Shay was instrumental in getting the reissue of a famous book by his grandfather Joseph Nicolar titled The Life and Traditions of the Red Man. The tall white-shingled tepee beside his house is a museum dedicated to Princess Watahwaso, the stage name of his late aunt, Lucy Nicolar Poolaw, who interpreted Indian music and dance.

Order saying you saw this write up on Insights and deduct $5 from your total. 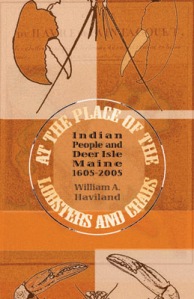 by William A. Haviland

For thousands of years, native people lived, loved and labored on Deer Isle as well as the surrounding islands and peninsulas of east Penobscot Bay. Then, just over 400 years ago, their lives were disrupted by the arrival of strangers who, over the next 150 years, took control of their homeland. But the original people didn’t just go away. Instead, they survived this assault by adapting in creative ways to life in a world controlled by others.

This book is the story of their cultural survival in one particular neighborhood of the Maine coast over the past 400 years.

“Haviland’s work fills a long void since the last Indian romanticized tales that flourished in the late 19th and early 20th centuries. Haviland’s research breaks barriers in citing the Indian families that continued to live in their traditional manner and gained acceptance as well-respected citizens in their communities during the 19th and 20th centuries.” — Nicholas Smith, PhD

“Haviland’s own culture as an American, a Mainer, a scholar with a lifetime connection to Deer Isle, all weave together in the tale of a place in Maine and the native population that occupied that area over time. Although Haviland is not a Native American, his unique perspective and open-mindedness have crafted a narrative that honors the Maine Native American Wabanaki who have historically occupied this place.” — James Eric Francis, Sr., Tribal Historian Penobscot Nation.

Published in cooperation with the Deer Isle- Stonington Historical Society

Order saying you saw this write up on Insights and deduct $5 from your total.
Please send check or money order to Polar Bear & Company, PO Box 311, Solon, Maine, 04979