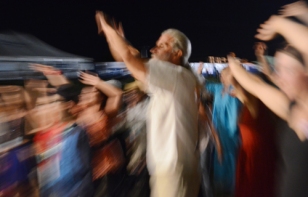 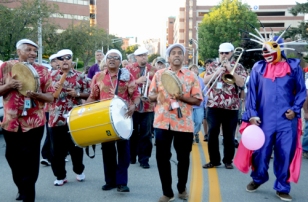 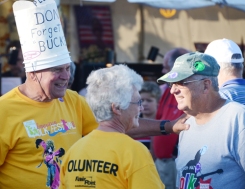 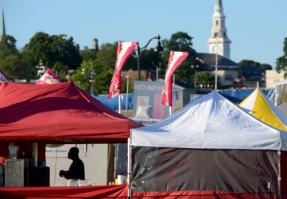 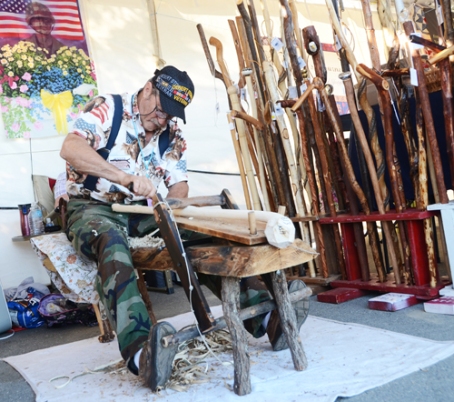 The following is the article that went with the photos on Maine Insights.

Bomba Puerto Rican rhythms filled the streets of downtown Bangor on a late afternoon in August with energy and excitement at the kick off the American Folk Festival. People danced in the street accompanying the band of Jorge Arce and Raiz de Plena in a parade that traveled down Broad Street to the main stage on the waterfront.

Bomba is about the encounter and creative relationship between dancers, percussionists, and singers and Bangor’s community became thoroughly involved with the musical happening. As Arce sang brass instruments, and drums resounded throughout the area, people near to the stage allowed the music to fill their souls as they let lose dancing with great abandon.

Bomba originated in Mayagüez, Puerto Rico amongst the slaves who worked the sugar cane fields. These slaves came from different regions of Africa so they could not easily communicate with each other but they found common ground in music.

“The tradition of my island was great to have here, it’s root music of Puerto Rico and the performers with their white hats reminded me of my father and uncles. It was very special for me,” said Maria Baeza, a Folk Festival organizer and board member. “It was a magnificent way to start the festival.”

People from all over the state and beyond attend the festival every year, heralding from every background imaginable. Some come to listen to all the bands others focus on music that specifically moves them. The dance stage on Friday night and Saturday afternoon had a popular rockabilly band, Sonny Burgess and the Legendary Pacers, with pianist Lance Lipinsky.

“We come to Maine a lot and we try to time it with the Folk Festival,” said Charlotte Patterson from Albany, New York. “The rockabilly was out of this world.”

This year’s lineup included 16 groups, performing the traditional arts of their region, culture, and heritage. Blues, Chinese Opera, Latin American, Bluegrass, Zydeco, Gospel, Quebecois, Irish and Greek were also heard on the banks of the Penobscot. Here common ground moves with different rhythms, which is the magic of this festival that has been bringing cultures from around the world Maine’s Queen City for twelve years.

“When I come to the festival inevitably I’ll walk by a tent and hear music play that I never heard before. I never would have gone to it on my own. So I find myself sitting down, sometimes tearful, mesmerized,” said Baeza, originally from Brooklyn, New York. “It expands my horizons and enriches me. That’s something I love about the festival.”

The festival of music, food, quality Maine products, dancing and unity counts on volunteers who range from young to old and all share the enthusiasm for the community event that brings the state together.

Dale Wilkes has been volunteering since day one, standing outside during rain, wind, of colder temperatures. She was one of an army of 750 volunteers who wore yellow t-shirts with the image of dancers from the Qi Shu Fang Peking Opera Company, one of the featured performers.

“I love all sorts of music and this is the best place to come for music. It’s really brightened up Bangor and brought in a lot of other arts and culture to the town. It’s a wonderful event for people of all ages,” said Wilkes.

Bucket Brigade volunteers walked around and stood at strategic locations offering stickers and schedules in exchange for some money in the donation bucket. One of them adorned his head with a bucket hat.

“People love the hat,” said Bill Hiscock who has been volunteering with his wife, Hazel, collecting donations from attendees for eleven years. “It works.”

Deb Newman has volunteered since the festival began, and eventually became an artist’s buddy. The duties of an artist’s buddy are to make sure the performer assigned to them gets to the stage on time, is satisfied with their hotel and looked after during their stay.

Being on the inside of the event every year gives Newman a special perspective.

“As a volunteer you get to see behind the scenes and you get to experience the event in a really unique fashion,” said Newman. “Plus you get to know the performers better and make new friends.”

For many festivalgoers Maine made products and food are key ingredients to an overall great time. Ann and Bob Dickens from Ellsworth have spent nine years working out of their home and selling to local shops. Going to a festival where attendees are people who would like their handcrafted leather goods expands their market.

Mountain Mama ‘s home remedies are made from organic herbs from her garden. The recipes were created as she treated her children when they were growing up.

“The business grows every year. I love coming up here on the river. The music and food are great,” she said.

There were 73 vendors at the festival. In 2011, an economic impact study by the Maine Arts Commission indicated that the festival generated about $15.3 million in revenue for the region.

“Having the folk festival here has really made a big change in downtown Bangor with arts and the creative economy,” said Rep. Adam Goode. “It’s really invigorated Bangor, it’s wonderful to see all the different people it brings into town.”

This year 100,000 people attended over three days and the Bucket Brigade collected $122,650 in donations. The festival has been running in the black for the past two years.

“I like the numbers but how do you calculate the value of bringing the world to Bangor’s waterfront? How do you quantify the tens of thousands of festival-goers who have made it an annual summertime destination?” asked Heather McCarthy, Executive Director of the event. “It’s the heart, the spirit, and the soul of our community that feels the real impact of the American Folk Festival, that’s what counts. We know we love it.”

Over the past decade the Bangor Waterfront has been transformed. Now concerts, festivals and outdoor events are held every summer and fall on the Penobscot River’s bank that once saw hundreds of ships launched and logs transported to markets around the world just a hundred years ago.

Resurrecting an abandoned waterfront into a cultural center that would host this festival and others took the foresight and dedication of many local citizens.

“The vision of the festival and bringing it to the waterfront has helped Bangor’s creative economy,” said Baeza. “The city saw what it could be and how alive it could become. They have beautified the waterfront every year. It’s unrecognizable from what it was before.”

One of the key visionary’s was former Bangor Mayor John Rohman back in 2000. He then went on to become Maine Art’s Commissioner with the Baldacci administration. Rohman along with Governor John E. Baldacci believed that Bangor could host the esteemed National Folk Festival.

Julia Olin, associate director of the National Council of the Traditional Arts in Washington, D.C., came to scout out Bangor for the National festival after she received an invitation she couldn’t turn down. She arrived during an icy winter but was welcomed with the warmth of Bangor’s citizens.

“We liked the people of Bangor. They were enthusiastic, bright, competent, down-to-earth. They had openness. We sensed a community that is not intimidated by building a new event,” said Olin.

In a competition, involving much bigger cities, Bangor came out on top and was appointed to host the National Folk Festival from 2002 to 2005. Governor Baldacci put some funds from the governor’s contingency fund into the festival to help lift it off the ground and the transformation of the waterfront began to take hold.

Around the same time the University of Maine moved its offices and an art gallery from Orono to downtown Bangor and waterfront improvement grants were awarded from the state. Now the festival continues as The American Folk Festival.

“Since the festival got going there’s been more vibrancy in downtown Bangor, all day and into the night. There are defiantly more social things going on which has been an obvious positive change,” said Rep. Goode. “The city has done a tremendous in brining a lot of concerts to the waterfront which has been great for the entire region.”

Bangor has a history of cultural enrichment and economic growth, which has always depended on her community being able to move the city forward for the majority of its citizens.

The city was on the verge of becoming the lumber “capitol” of America’s eastern seaboard in the 1800’s because of the state’s rich forest resources. Shipbuilders from Boston to New York came to Maine to hunt in the woods for the best trees for their trading vessels, turning Bangor into boomtown. As wealthy businessmen moved to the city they brought their families who needed cultural events. Plays, and concerts entertained them. For the loggers Bangor’s red light district did a welcome trade.

In the mid 1830s, Bangor was home to more than 300 sawmills. By 1900, an average of 2,000 vessels called at the Waterfront each year. But when railroads expanded west the market for Maine wood diminished as new areas across the country began to supply builders. In 1911 much of Bangor was destroyed in a fire but the community quickly rebuilt and more parks were introduced.
When the mall opened in the 1970’s Bangor businesses downtown suffered. Now with the Waterfront’s renaissance the outlook for downtown has changed. With the University of Maine just fifteen minutes away, Husson University in town and young entrepreneurs finding new occupations in the Queen City the need for new avenues of entertainment has exploded in recent years and the city continues to accommodate that growth.

The folk festival has helped that progress and it evolves with the community.

“This year the children’s village is totally different as we moved it away from the periphery of the festival and repositioned it at the heart of the festivities. We listened and collaborated with the community to make the move,” said Baeza. “That’s key to the success of our festival.”

And key to Bangor’s growth.