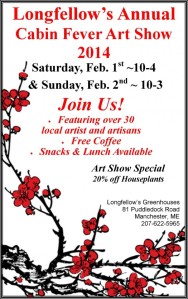 Longfellow’s Greenhouses makes space for some 30 artists to display and sell their wares By Keith Edwards of the KJ, kedwards@centralmaine.com
Here’a an excerpt: [It’s]an annual opportunity to be surrounded by art and plant life while large overhead heaters blast down warmth in the depths of winter.

Scott Perry, of Farmington, a former freelance photographer for the Associated Press and former Maine Times, displayed numerous landscape photographs, including two of downtown Gardiner, other area downtowns, and a spectacular panoramic shot he took from Baxter Peak on Mount Katahdin. He said he goes to Baxter and shoots photos whenever he can. He said he favors downtowns with old building facades and features, such as Hallowell and Gardiner, but also sometimes picks a spot because, frankly, a photograph of it is likely to sell.

“Local images sell best,” he said. “People form that connection with their town or a favorite place.”

Scott Longfellow, owner of Longfellow’s, said the annual show has taken place for somewhere around 20 years.

He said it gives artists a place to display and sell their work at a time of year when there isn’t much else going on in Maine, brings foot traffic into his business, and gives shoppers a break from winter and a chance to walk amid plant-related items, art and crafts.

“It’s amazing how it stuck,” Longfellow said of the event, an idea of his retail manager at the time. “Yesterday was the biggest day we’ve ever had for this event. The weather broke so the sun was out, it was in the 30s, everybody was happy.”

Longfellow said the greenhouse where most of the artists were gathered is usually empty this time of year anyway. Come April, workers will start filling it with plants and related items.

For the full article go here