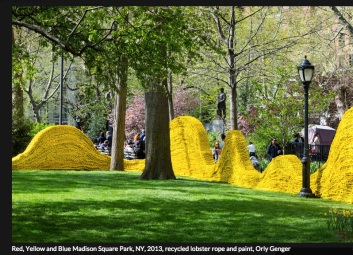 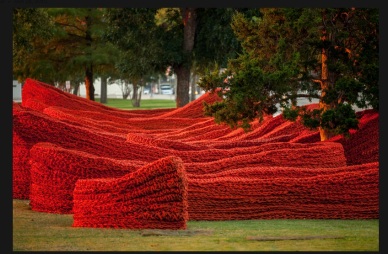 MPBN’s Tom Porter reports on New York artist Orly Genger’s sculptures made out of discarded rope purchased from Maine fishermen. An excerpt from his report:

Genger’s latest project is a monumental sculpture to be installed in South Korea next year, utilizing more than 3 million feet of rope. And to craft the piece, she’s prepared to pay fishermen good money for outdated trap lines they don’t have much use for.

There’s a saying back in England – “Money for old rope” – meaning to get payment for something which is seemingly worthless. Easy money, in other words. Well, that phrase is now a reality for many Maine lobstermen, thanks to the world of modern art.

Down on Portland’s working waterfront recently, Laura Ludwig slides open the back of her U-Haul. Ludwig – who used to work for the Maine Department of Marine Resources – was contracted last summer by New York artist Orly Genger to buy back 200,000 pounds of rope from New England fishermen, most of them Maine lobstermen.

Inside the U-Haul truck is an example of Genger’s art work – a 5-foot by 2-foot hand-crocheted section of a painted “rope blanket” is probably the best way to describe it.

“I asked her to make a sample so I can show lobstermen as I collect their line and talk to them about it, the scale of her operations, she’s a very small woman,” Ludwig says.

Laura Ludwig: “This is probably 80 pounds of rope right here.”

….
Ludwig has just spent several days traveling the Maine coast, paying 50 cents a pound for old lobster rope. This time around she’s bought nearly 30,000 pounds of the stuff. She says about 120,000 pounds of rope have now been collected from more than 200 lobstermen since the project was launched.

When completed, it will have put $100,000 back into the pockets of people like Tom Martin, of Cape Elizabeth, who just sold 1,000 pounds of old rope.

“I mean, it’s money we never thought we had coming,” he says. “It’s stuff that otherwise would be thrown away, and then there’s money in your pocket to invest in new rope or traps or whatever you might want to put that money towards. It’s very, very helpful.”