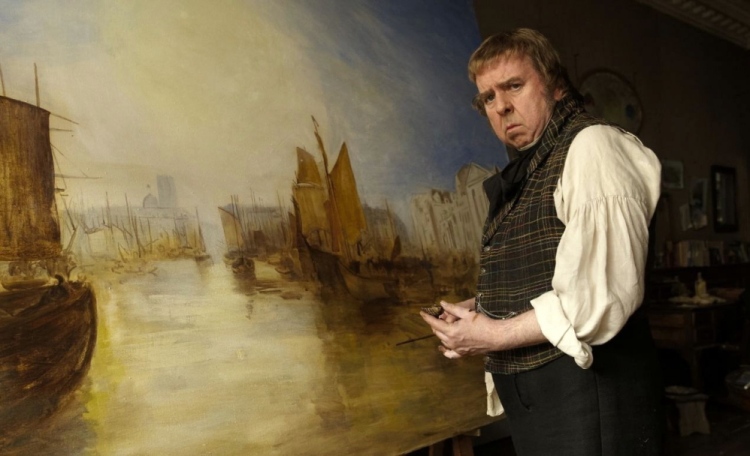 MR TURNER, from great British director Mike Leigh explores the last quarter century of the life of the great if eccentric British painter J.M.W. Turner played by Timothy Spall. The movie is currently at independent theaters, like Railroad Cinema, across Maine.

The opening shot of Mr. Turner transports the viewer for 2 1/2 hours. In 1820s Holland, a windmill dominates a pastoral landscape. The sun looms low on the horizon. Two women, chatting, enter the frame from the right and follow a path along a canal as Leigh’s camera meets them, and then pivots to capture a lone man in a tall hat in the distance. He is sketching, head up to catch the sun, head down to interpret it on his notebook.

Mr. Turner covers a quarter-century in Turner’s life and reveals a bit more of the artist at its center in each scene. When it’s over you feel as if you have been somewhere, to another century, peering at the world through a different set of eyes.

One of the wittiest scenes brings the daguerreotype into Turner’s life. As Turner and Mrs. Booth (now his domestic partner) sit before this strange camera, intimidated into a frozen posture and a fixed, profoundly uncomfortable expression.

At one point, Turner’s 1838 painting “The Fighting Temeraire” comes to life on screen, as Turner floats by with some mates on his own craft. It’s the end of an era, he notes, as a steam-powered tugboat ushers the old ship to its next life.