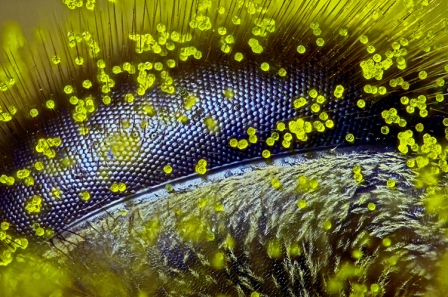 View the artworks of 23 artists who were selected from more than 100 entrants from around the world for this year’s science-inspired exhibition about biodiversity and extinction. The co-jurors for this exhibition were Elizabeth Corr, manager of art partnerships at the Natural Resources Defense Council, and Paula J. Ehrlich, president & CEO of the E.O. Wilson Biodiversity Foundation. This exhibition is the 17th International Art-Science Juried Exhibition organized by Art & Science Collaborations, Inc. (ASCI).

View the winning images of the 2015 Nikon Small World Photomicrography Competition. First place was awarded to Australian Ralph Grimm for his close-up image of a bee eye covered in dandelion pollen grains. Grimm is a high school teacher, self-taught photomicrographer and former beekeeper. While bee colonies continue to dwindle worldwide, Grimm hopes his image can serve as a voice for these insects that play such a critical function in pollinating the world’s crops. This year’s competition received over 2,000 entries from more than 83 countries.